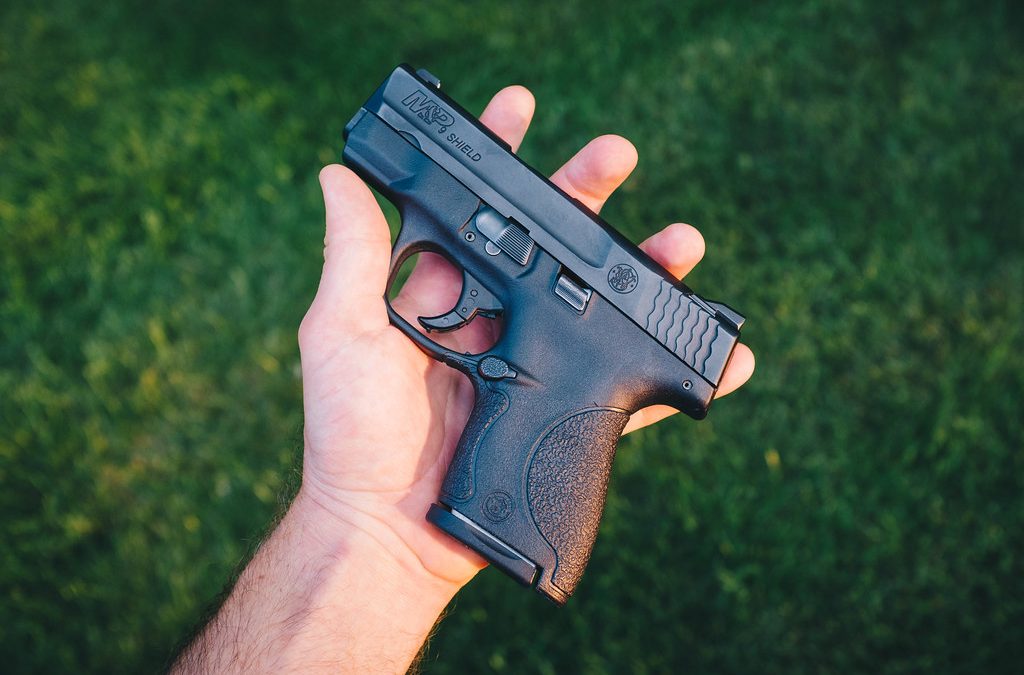 Gun manufacturers have been making concealable handguns smaller and smaller for the past decade, and without care, that can lead to less reliable weapons. Smaller sight radius and shorter barrels can mean less accuracy, and smaller parts with the same ammunition could mean less durability. Manufacturers have worked to overcome these limitations and deliver the best of both worlds, and seven years ago, Smith & Wesson entered the market with their M&P Shield.

It was conceived as a shorter, more conceal-friendly version of their M&P pistol line. There were a number of forms and variations of it, so let’s just talk about the base model.

The Shield is 6.1” long, 4.6” tall, weighs 20 oz. unloaded, and has a 3.1” barrel. It comes with two magazines, one of 7 rounds and one of 8. Some of its original features are common to many modern handguns, like a thumb safety (though you can get it without one) and white dot sights. It’s chambered for the standard 9mm Parabellum, which you’re probably used to if you’ve concealed before.

One thing that really stands out about the Shield is its thin profile. The magazine is single stack, meaning it’s only the width or one round (plus the thickness of the walls), as opposed to double stack, where rounds in two lines fit into each other in a zig-zag. This allows for a profile of less than an inch, perfect for concealment.

The short pistol grip also helps concealment, though it means the pinky has nothing to hold onto. Extended magazines are available for those who want the extra stability of pinky grip.

The action is striker-fired, so there is no hammer. A striker-fired pistol has a shorter trigger pull, even if the pull weight is the same as a comparable double action. This reviewer did a comparison in which a double-action only (DAO) trigger had a ½ inch pull, while a striker-fired trigger has only a 1/8 inch pull (DAO means the hammer cannot be cocked manually, and every trigger pull is double action). A pull that is shorter in time and distance means less likelihood of aim disruption.

Trigger reset also takes longer with most DAO triggers, which have to be released further forward than striker-fired triggers. In the above review, the DAO pistol needed about 5/8 of an inch to reset, more than twice the ¼ inch the strike fire needed. The Shield’s reset is also both audible and tactile, so you know when you’re ready to fire again.

This handgun also has a take-down lever that allows disassembly into a basic field strip without pulling the trigger, and the polymer frame makes for easy cleaning.

The only real drawback is the single stack magazine capacity, which limits how many rounds you can carry. But there’s no way to make any handgun this slim, light, and concealable with a double stack magazine. That’s simply a trade-off every concealed carrier has to choose for themselves.

If you’re interested in seeing this handgun or have any special questions, Lake Charles Tackle would be happy to help. Though there is a suggested retail price of $367, we are offering a limited-time deal of $299 for the basic model and two magazines, in-store only. Call us at 337-479-2999 or stop by our store on Common Street in Lake Charles. And check out our other guns and accessories online!